I have been involved in this project UbuntuNewbie after the UOS-1411. My involvement in the Ubuntu Online Summit was I had an opinion that the Ubuntu community can be divided into developers and End-users. There was too large a gap between them. The original discussion can be followed here. However, after that I seemed to have gained a bit of traction and have been attracting the attention of some developers who are taking my side in the list of reforms that I have proposed. There has been a lot of discussion on my ideas in the otherwise serene Ubuntu-community-team mailing list.

The biggest and the most proud moment was when Daniel Holbach, an Ubuntu developer has created for me a work item in the Ubuntu launchpad blueprints. It was a welcoming surprise. The link to this is

So now, here is the mockup that I present in front of you. 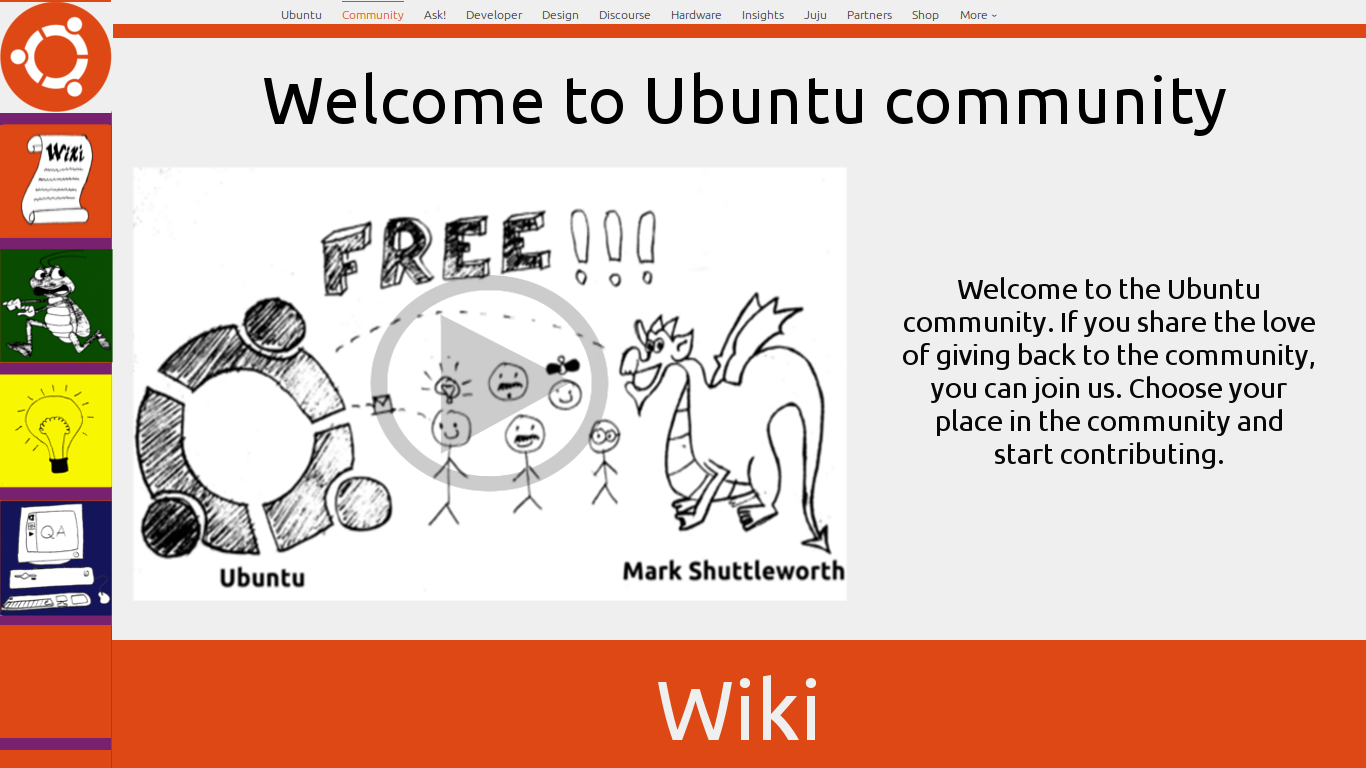 First things first, the colour scheme of the side bar has to be changed to include some pale and non-catchy colours as many of you would notice. But then, this is a picture of the concept. Bear with the color scheme of the side bar for now. I am sure that it will not be like this in the revamped website. There is an extra slot in the side bar that is empty where "help" should go.

Now, to the actual part of the discussion. Since we are living in the modern world where time is moving so fast, we simply do not have the time to read pages (atleast the end-users do not have time to read, I don't care if the developers prefer more text because they are already a part of this community and this is meant to attract newbies). Hence following the trend of minimalism. Less text, simple videos, easy to use side bar which is intentionally made similar to Unity.

If you scroll down the page (which is not possible because it is a mock up image and not a html), the wiki part would come into focus. Notice the background colour of that icon in the side bar is the background color of the topic under discussion. So, it is the least confusing.

A suggestion would be the addition of some mechanism to highlight the topic selected in the side bar (which is not visible here but should be there. I just did not implement it). This suggestion is debatable because we have already got a colour co-ordination system. Hence the non-inclusion in the mock up.

Every topic of discussion would have it's own video i.e the wiki topic, if you scroll down to it will have the same layout as introduction to Ubuntu community with an introductory video ( it might carry a different theme) with some text in the side telling briefly what this is about.

And the last empty slot would be for help. Of course this might be considered as a template and the final website may have more buttons in it. But, let us go through the initial discussion of the template so that we can discuss the particulars.

For people who were waiting for the video in the mock up, here it is.